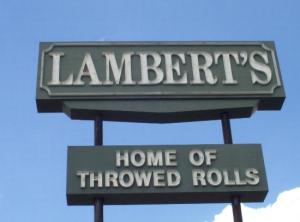 Imagine with me that a friend in 1942 told you “Hey, I want to start a diner in the town of Sikeston, Missouri.” You might respond by asking a few questions, like “where is Sikeston,” and “how does that possibly sound like a good idea?”

And you would be wrong.

In 1942, the Lambert family opened Lambert’s Café in Sikeston, Missouri. In 1976, Norman Lambert threw the first roll at a waving guest across the crowded restaurant, launching (no pun intended) the “throwed rolls” for which Lambert’s is now world famous, as proved by the all-star guest list including the three above and many more.

To be clear, Lamberts is not just a diner with rolls flying across the room. It is also a very well-managed restaurant with a focus on creating an overall remarkable experience for guests.

The point is that, while the obvious answer to “let’s build a diner on a lonely highway in Missouri” would be “no,” it’s not always about the location, or even the concept of a diner. It’s about the power of a family and team determined to create something remarkable, and the effort the world will go through to find them when they do. 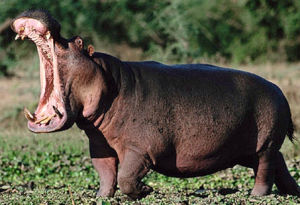 There’s a tragic and amusing story behind the title of Ernesto Sirolli’s book, Ripples from the Zambezi.

As a young man, Sirolli worked with groups sent from Italy to Africa for “economic development.” As was the tradition (and unfortunately still is), one group went in search of problems to fix, in this case along the Zambezi River. They found that the locals had no agriculture, despite fertile soils, and determined to bless them by introducing Italian farming.

A few days before harvest time, the Italians were quite proud of themselves. They had taught (or at least demonstrated) agriculture along the river, and saw an abundant crop in their future. Unfortunately the local hippopotamus population saw the same thing. They came out of the river and ate the crop.

“Why didn’t you tell us about the hippos?” asked the Italians? The answer came calmly: “ You never asked.”

And therein lies the problem with billions of dollars of “economic development” funding supplied by wealthy countries around the world. “They never asked.”

Michael Matheson Miller covers the same topic from a different angle in the Poverty Cure series, where several businesses in struggling countries face competitive pressure from the “relief efforts” that flood their market with free goods.

So, what is the solution? According to Sirolli, it is called “facilitation.” Instead of marching into a deprived area on a mission, his team now hangs out at the local coffee shop. There they learn what entrepreneurial initiatives already exist, and offer to support them. The locals, who are more clever than we give them credit for, then do the work with a little support, wisdom and encouragement.